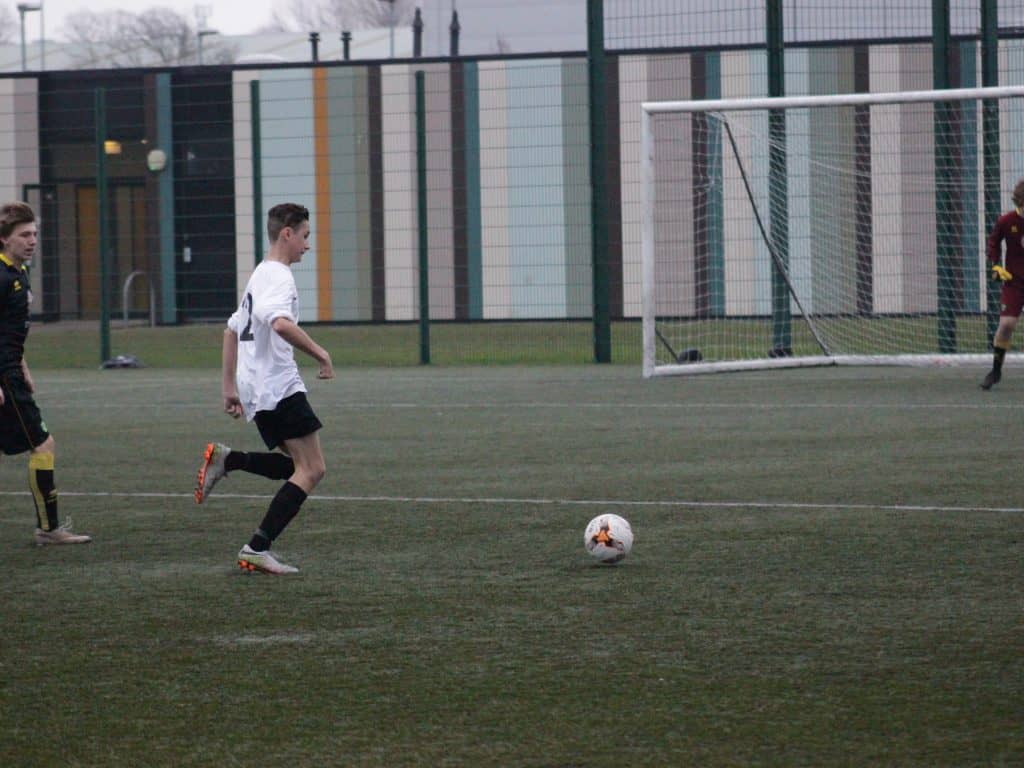 After this frantic start the goals dried up for Lowestoft after missing several chances which were all blocked or narrowly missing the goal. However the Lowestoft Sixth Form College scored again in a near mirror image of the second goal with Hugo Colby and Callum Bell linking up again to make it 3-0 after 28mins. As seemed to be the pattern in the game Lowestoft scored again 2 mins later with a well-deserved goal for Callum Bell who had been outstanding in this first half. An excellent finish on the outside of the area and curled into the far right corner.

With the call of only 5 mins left in the first Lowestoft Sixth Form College finished the half brilliantly  with Hugo Colby completing a first half hat trick with a strong run and great finish. From the kick off Rhys Hunter put pressure on the East Norfolk Sixth Form right back and stole the ball off him on the half way line and ran through and calmly slid the ball passed the keeper. Brilliant individual skill from Rhys Hunter who was very impressive in the first half. Before the half time whistle went Hugo Colby added his 4th goal of the game in a devastating display.

At half time several substitutions were made and formation changed to suit. Casey Wilson being the pick of those controlling the middle of the park and showing the impressive ability to spray passes all over the pitch. With Lowestoft having Rory Holland, Callum Bell and Casey Wilson in the middle of the park really took control of the game and showing their true ability.

The second half was not fraught with goals and action like the first but after an unfortunate own goal from a Rory Holland cross, Lowestoft notched their first goal of the half. 5 minutes later Callum Bell claimed his second goal of the game which was well deserved with an audacious flick over the goal keeper after a good run in to the East Norfolk box.

After this goals came steadily from Lowestoft with Luke Chamberlain scoring his first goal of the year. And shortly after this Syer Shulver scored a great header from a Harry Pickess cross who was unable to add to his tally further. With virtually the last kick of the game Rory Holland scored after running in behind the East Norfolk defence to leave the score board reading 12-0 to Lowestoft Sixth Form College.

Even though the goals for Lowestoft Sixth Form College will grab the headlines the defence was exceptional for Lowestoft. Syer Shulver, Daniel Pitts, Jacob Layzell (who was making his first appearance this season) and Luke Spurling all performed brilliantly keeping East Norfolk at bay.

So much so that the Man of the Match this week is going to be rewarded to Daniel Pitts who put in an excellent performance- Well done Daniel!