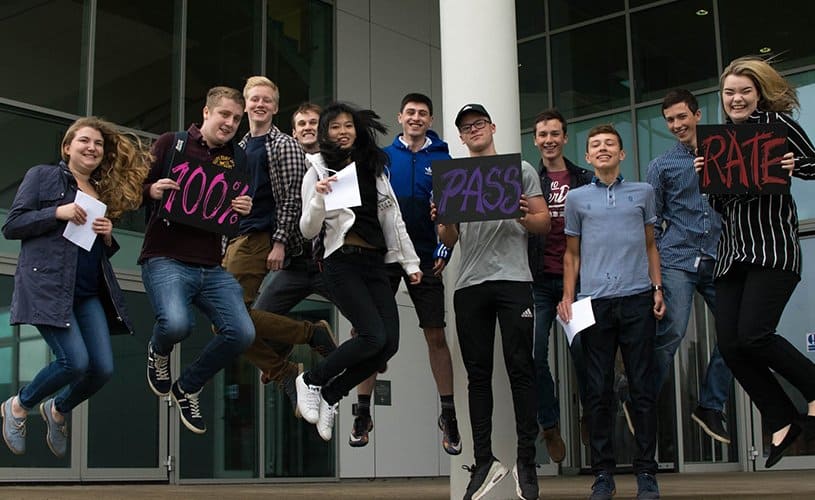 This is the first time students have had to take all of their exams at the end of sixth form, as opposed to the previous structure where exams were staggered across two years.

“I am very proud indeed of staff and students today who have worked incredibly hard together over the last two years to get ready for these new and very demanding A level exams and have achieved these exceptional results. Teachers and mentors have inspired and motivated our students to excel. We truly believe in the potential of all our students and we are particularly thrilled with these results as Lowestoft Sixth Form College is an inclusive, non-selective local college. Our results demonstrate just what can be achieved with hard work and a real focus on every student working towards their personal best. We really do live our mission – to enable our students to excel and progress”

There was a multitude of outstanding individual performances at the college, including that of 18-year-old Rhys Furlow, who achieved A* grades in maths, physics and biology.

“It’s been tough but I’m so happy with my grades, especially as I thought I’d done really badly in some of my exams,” said Rhys, who is from Lowestoft. “I’m going to study computer science at Warwick University, which is something I’ve wanted to do for a while.”

Hundreds of A-level results envelopes have finally been opened, putting an end to an agonising wait for Lowestoft Sixth Form College students.

But it was also time for BTEC students at the college to discover whether their hard work had been rewarded. It was all smiles for Chris Williamson, who achieved a triple-distinction in his BTEC Level 3 ICT course having left school without any qualifications.

“I came out of high school with no GCSEs, so to come to sixth form I had to do a pathway course to prove that I could handle college,” said Chris.

“After the course I went on to do the ICT course and I’m really chuffed with my grades.”

“The thought of adult life is quite scary, but it’s exciting at the same time.”

Chris harbours hopes of a career in social work and his results have earned him a place on the Youth Studies course at Nottingham Trent University. There was delight for one student who saw significant improvements in her performance during her time at the college.

Eighteen-year-old Bethany Dewhirst, from Lowestoft, got off to a slow start when she began studying maths at Lowestoft Sixth Form College. But two years and plenty of hard work down the line, Bethany has pulled out all the stops to achieve impressive results! “At the start of my first year I was getting a U grade in maths and now I’ve finished sixth form with an A,” said Bethany. “I was so nervous before picking up my results but I’m really happy to have come out with two grades and a B, which is much better than I was expecting. “I’ve really enjoyed my time at the college and got on so well with all my teachers; they were all really supportive.”

There were some outstanding individual performances such as:

Rhys Furlow who achieved A* A* A*

Joel Pointon achieved A* A* A

Katie Landles who achieved A* A  A

Harry Adams achieved A* A* A  A

Jack Adams achieved A* A* A  A

Charlotte Le Grice achieved  A* A A

Ryan Hawkins achieved  A* A A

Euan Pitchers achieved A A A

Lewis Fricker who achieved A* A A  and  D*

…and many, many more #standout students !

A huge congratulations to our very successful students, we are so proud of you: