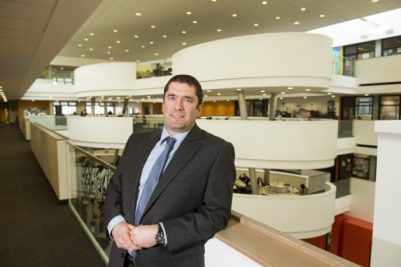 A newly installed sixth form principal has vowed to carry on where his predecessor left off and unlock the potential of young people for years to come.

David Gartland, who has been the vice principal at Lowestoft Sixth Form College since its opening in 2011, has taken the reins after former principal Yolanda Botham moved on to pastures new.

Over the last seven years, he has helped to establish the state-of-the-art facility as an educational hub for East Suffolk.

Now a few weeks into his tenure as principal, Mr Gartland saluted the work of Ms Botham and the sixth form’s growth as an attractive place to learn.

“Yolanda was hugely enthusiastic and determined to provide opportunities for youngsters,” he said.

“We wanted to make sure young people didn’t have to travel to other areas for a good education, and everyone very much bought into what we were trying to do.

“Yolanda and I were very much a partnership; the results have been incredible and that was obviously one of our missions.”

Mr Gartland may have moved into a new role, but he is certain that his involvement since day one – combined with meticulous attention to detail – stands the college in good stead.

He said: “I took an active role in everything when we were getting things up and running. The problem with new organisations is that there’s no culture and no history, so you have to establish what you want to achieve.

“We had 400 job applications when we first started, but we had to get the team right otherwise it would be useless to have the resources and shiny new building.”

The latest results certainly suggest a bright future, but there exists an ethos within the college emphasising that numbers are not always the most important thing.

Mr Gartland added: “Behind every statistic there’s a member of staff and a student. Our staff always go that extra mile and to hear what our students are going to go on and do is a great feeling.

“This is a place where young people can increase their life chances. We’ll continue to be innovative and ensure students have an enjoyable and inspiring time here.”